An interview with James Noble, chairman of Sanford Housing Co-operative in London. 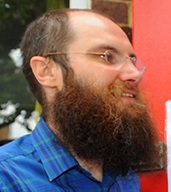 James moved to London, from Middlesbrough, to work and to be involved in a “more vibrant” political movement. He started to live in Sanford fourteen years ago even because it was not far from his job. He has been soon involved in the democratic development of the cooperative  and in different projects, becoming first secretary and, then, its  chairman.

What do you want to start to tell me about Sanford?
The logic behind Sanford is to create more houses, in a communitarian spirit, mostly for single people. Sanford as an experience started in 1971 by a group of housing activists, mostly students. A lot of people came in this area studying in local university. The landlords, to rent their properties more profitably, evicted the families  from their homes. When the students knew the properties they were renting  had been freed in this way, because the families  didn’t have regular income to pay as much rent,  they became housing activists. They started to look for a formula to create their own houses.
Then, Sanford was created as house cooperative, a no profit organization. The founders put some money together and they got some funds from the local council (who needed to provide houses in the area) and they designed the residential and external areas, with the purpose to build as much houses as possible for a cheap price (but  the quality of buildings is very good, sound but basic).  The founders of Sanford got a piece of land between two railways lines. It was perfect for single people because families with children need a different atmosphere. They built the property getting a loan from Central Government and a bank. The founders started to look for some tenants to choose using introductory interviews and those tenants chose other tenants.
Now through  the preliminary interviews and the acquaintance of the new tenants with the residents they’ve to share the space with, we try to make the cohabitation as harmonious as possible.
From a decisional point of view, each person moved in had right to a vote in the general meeting; everybody had and has even today one small portion of “control”.
The management of Sanford is done through monthly representative meetings. In general, a group of 8 people elects a representative. If there are, for example, doubts about the space to leave to car park or to vegetable garden, the representatives discuss and negotiate in these meetings. Some decisions take some time  but others can be quite quick.  Big decisions go to a general meeting where everyone just represents themselves.
Everybody living in Sanford is invited to behave in a reasonable way. Sometimes some tenants have different  kind of problems (alcohol or drug addiction backgrounds) and for them could be quite difficult to behave properly  but, in general, there is a quite high level of tolerance. The result is that some problematic persons are living in Sanford longer than anywhere else.  In the last years we have also been able to attract a different kind of people (when I moved in many tenants were coming from squat experiences but now the situation is changed).  Sanford wants to give people an opportunity for self-determination.

Could you tell me something about the philosophical inspiration of Sanford?
At the beginning, people wanted mostly to be able to control their environment, having access to a cheap home.  The founders have for long time been very busy to create the basic presuppositions of the project. It  is also important to mention that many people, joining Sanford, lived in spaces without furniture or comforts then there was big attention to offer the basic commodities.
In the years, some things have changed and now there are different attitudes. We don’t have to ensure everything anymore to the people coming here. Now there is a more environmental and sustainable oriented attitude. For instance, we’re following projects to reduce the polluting emissions.  We do not demand everybody devote part of his time for work for our organization but most do at least a little.  Sanford, at the moment, has not a big ecological impact, even if the nearby university is growing, attracting more home-needing students  applying to live here.
In general, in the last years we’re more opened to outside, we often meet with outside people.  Some of our members helped out other locals to re-open the library as a community project when the council cut the service and we have won awards for our environmental work.
I can say we’re basically a laical community, strongly oriented to democracy in the decision — from this point of view there are periodical shifts , from a more authoritarian approach to a more responsibility based one —and to sustainability.

What about private and common spaces?
The rooms are totally private. We’re just expecting people don’t disturb the neighbors with music etc.
In general, the common areas are managed by people living nearby. Usually we don’t pay anybody to do works in the common areas. We remind to anybody not to have any dangerous behavior (something which can cause fire, for example) but otherwise people do as they please.

How many people live here?
120, many of them are students or ex-students but most are not.

There are people having a regular frequentation of this place from outside?
We don’t have a formal “friend of Sanford organization”. There are people coming here, also former members, and there are few people who don’t live here but are part of the community. We have a yearly event, involving a lot of people, ex tenants, and anyone who knows us.

What about the relations with UK community network?
I think I can say we’re a quite insular organization. This is changing in the last 6-7 years but there are still many organizations we don’t have many links with.

Have you some relations with Global Ecovillage Network?
Not really

And some kind of privileged relation with parties, movements or similar, in UK?
Not really, there are several people belonging to radical left here but basically we’re on ourselves, without any formal relations with a political organization, we have links with some lobby groups and other co-ops. Some of the people living here relate with different sets, for example an anarchist oriented groups organizing events but it is something involving the individual sphere.

Does British communitarian network gather sometimes?
There is a strong festival tradition in UK but it is not structured for this purpose. Some of people living in Sanford participate to this festivals, traveling around for some months and squatting properties for short periods to accommodate. Periodically we attend coop specific meetings, we’re more cooperative than communitarian oriented.