Vatican Radio Interviews Emanuela Marinelli on the Shroud of Turin 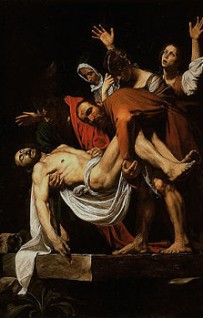 Emanuela Marinelli, graduated in Natural and Geological Sciences, is one of the main experts on the Shroud of Turin.

She has authored several books on this topic. She has recently participated in the ‘Jalsa Salana’ — the annual meeting of Ahmadiyya Muslim Community — near London, where an important exhibition on the Shroud was set up.

While in the airport, waiting for her return flight to Rome, she was interviewed on the 5th of August 2019 at 11.30 a.m., by the Vatican Radio during the broadcast Il Papa ieri e oggi (The Pope yesterday and today). You find here the podcast (in Italian) of the interview, between the minutes 28 and 41.

We offer here an English translation of the interview.

In the UK a Muslim community has held a discussion on the Shroud. It seems unthinkable but it is so. It is the Ahmadiyya community that is a Muslim minority group that has a particular veneration for the Shroud. They believe that it is authentic but they think that Jesus was put in the Shroud in a coma and was healed thanks to Joseph of Arimathea and Nicodemus’ ointments. So for them Jesus did not resurrect but recovered from the tortures he suffered and went on to live in India. Well, this, however, is what they believe and it is a strange thing because the Muslims are also divided on this issue and Emanuela Marinelli, world-renowned sindonologist, has participated in this great event.

You told me that this is a particular community, a Muslim minority that believes in the Shroud, believes that it is authentic, a strange thing for Muslims, am I wrong?

The Ahmadiyya Muslims were born in the late nineteenth century in India, then they moved to Pakistan, after the partition of 1947, but since 1984 most of them have had to emigrate because they have suffered persecution, in Pakistan,  not being considered Muslim by other Sunni Muslims.

But we have to say that there are tens of millions in the world, spread over two hundred countries. Their Caliph, however, must reside in London and many of them are in the UK. This is why this great gathering takes place every year in England, which sees around forty thousand people. The Shroud has also been included in this gathering for five years. The Caliph of the Ahmadiyya Muslims in 2015 went to Turin when the Shroud was exhibited, to venerate the Shroud. Since then we have been invited. It is the second year that I am invited; some have been involved since the first year, such as Barrie Schwortz, the scientific photographer, notably a Jew, who photographed the Shroud during the 1978 examinations. He is regularly invited and has been attending this conference for five years. The strangest thing is that a Jew is invited by Muslims but in reality their interest in the Shroud was born in fact from their conviction that the Shroud is authentic and that it is a proof that Jesus was not dead. Clearly they know very well that we don’t think the same thing. I am a Catholic and I think that Jesus was put dead in it and resurrected; Barrie Schwortz is Jewish and thinks that Jesus was put dead in the Shroud but he did not resurrect. And so there was a panel of discussion which was attended by more than one person. They organized two talks, one by Barrie Schwortz and the other by Professor Bruno Barberis (he has been also interviewed by Viverealtrimenti; here his interview), mathematician at the University of Turin, who for many years – he is a professor at the University – was the scientific director of the International Center for Shroud Studies which is in Turin. And then there was this panel of discussion, very interesting, where we participated. Besides me, there was David Rolfe, an English director who converted while he was making a documentary on the Shroud (Even David Rolfe has been interviewed by Viverealtrimenti: here his interview). He confirmed to me that he had started the documentary as an atheist and in the end instead he had become a believer. And this happened in 1978, the famous documentary “The Silent Witness“. Then there was Professor Barberis. Then there was, very interestingly, Prof. Peter Wadhams, who is a physicist at the University of Cambridge, who stressed his belief that the image on the Shroud is due to a radiation emitted by the body of Jesus at the time of the Resurrection; and this, said by a Cambridge physicist, does not seem bad to me.

Did you also discuss about the tests done with C14?

Yes, indeed. As part of the various events created at this great Muslim convention – because the conference is on various topics, clearly – a marquee was dedicated to an exhibition on the Shroud which was set up by an English sindonologist, Pam Moon, and a new panel of the exhibition this year was entirely dedicated to the article by Archaeometry (March 2019), which was published in this journal of the University of Oxford. This was also an exceptional event because the University of Oxford agreed to publish a statistical scientific work, done by two statisticians from Catania, prof. Benedetto Torrisi and the data analyst Giuseppe Pernagallo together with me and Doctor Tristan Casabianca, Corsican scholar of the Shroud. Practically this work concludes that the raw data, that is, the primary data of the analyses conducted in 1988, on the basis of which it was officially said that the Shroud is medieval, are inhomogeneous and are not compatible with each other.

Then there is a lack of homogeneity which makes it impossible to say that the Shroud is medieval. Also this was discussed and it is interesting, going back to our Ahmadiyya Muslims, who are the subject of discussion today they, unlike the other Muslims, think that Jesus was crucified; because Muslims, Sunni, Shiite, other Muslims, think that Jesus was replaced by another at the last moment, that is, there was a double, another person, so Jesus was not exactly crucified; and if Jesus was not crucified, certainly the Shroud that is in Turin cannot be his own. However, all the data of the Shroud that is in Turin suggest that it belonged to Jesus and that he was crucified. So this difference is substantial. The panel, this is interesting, was even attended by a doctor, a traumatologist, from the Ahmadiyya community, Dr. Malik, who works in Chicago. He is naturally convinced, like all Ahmadiyya Muslims, that Jesus did not die but was put in it into a coma and despite the great traumas he suffered, he managed to survive. It was an interesting discussion because the people present were really enchanted by this discussion and we must admire the open-mindedness of these Muslims who invite Christians and a Jew to speak even against what they believe, because I clearly repeated that I am convinced that he was dead, but it is not my belief so, of faith: there are many traumatologists, legal doctors who say that surely Jesus was dead, the wound of his side leaves no doubt.

But they have this idea and this year they made an exhibition on the fact that Jesus was treated with these oils, these particular ointments and he survived and went to India and they would have testimonies of the presence of Jesus in India and therefore, out of respect for our mutual convictions, the important thing, that their Caliph always reaffirms, is peace. Even the previous Caliph – they gave me books, even last year, interesting books about what they think – it is nice that the previous Caliph in a book just writes clearly: the woman is not made to stay in the harem or locked up at home. So this dignity of women, this parity of women. Peace is the first goal and they have the motto “love for all, hatred for no one”. So they also pay a lot for being absolutely pacifists.

And they are oppressed. But the interesting thing is that everyone claims that the Shroud is true. This is another important fact.

Yes, indeed. Their Caliph is the first to consider it authentic and even went on to venerate the Shroud in 2015. Indeed, the newspapers talked about it, that there was the arrival of this Muslim Caliph who was going to venerate the Shroud. So this is interesting because then it happens, I talked to them, in everyday life, it happens that they, Muslims, argue with some Christians who say that the Shroud is false due to the radiocarbon. The world is upside down. And they mention the works, instead, that have been published and absolutely defend the authenticity of the Shroud for scientific reasons. That’s why they want us there.

Then they clearly apply this also for their faith, but this request for scientific confirmations on their part is very interesting.

Scientific confirmations that are independent, of course, then they can be interpreted as we want but science is there to prove that the Shroud is true and C 14 is passed and must be redone.

This is a very beautiful thing especially because it opens up perspectives for peace and dialogue. They teach us how to communicate with people who think in a way different from ours. Here, these Ahmadiyya Muslims really are an example to follow. To engage in a dialogue with those who think differently in a civil manner. Hugh Farey was also present at this conference, they invite him. He is a retired biology professor, a Catholic, English, very convinced that the Shroud is false.

And we were there to discuss. He was very civil, of course. He also discussed with us, in a very civil, very nice way, with his reasons for continuing to believe in the radiocarbon dating. We had lunch together, we were with them. It is a really beautiful thing. We truly return full of peace from this conference. And this must be an example for us.

Which will be the next meeting on the Shroud, Ms Marinelli?

Barrie Schwortz and even Pam Moon, the organizer of the exhibition, will go there, so we can definitely get the first-hand news on this other important conference. 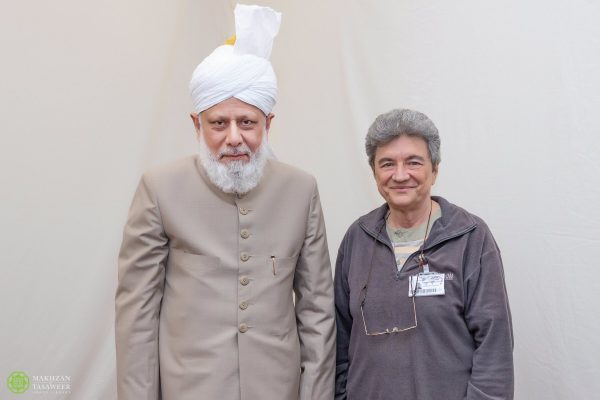