The Reign of Quantity and the Signs of the Times 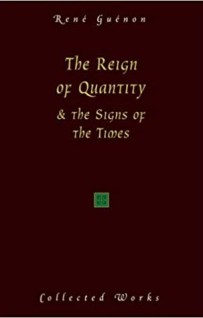 The Reign of Quantity gives a concise but comprehensive view of the present state of affairs in the world, as it appears from the point of view of the ‘ancient wisdom’, formerly common both to the East and to the West, but now almost entirely lost sight of. The author indicates with his fabled clarity and directness the precise nature of the modern deviation, and devotes special attention to the development of modern philosophy and science, and to the part played by them, with their accompanying notions of progress and evolution, in the formation of the industrial and democratic society which we now regard as ‘normal’. Guénon sees history as a descent from Form (or Quality) toward Matter (or Quantity); but after the Reign of Quantity-modern materialism and the ‘rise of the masses’-Guénon predicts a reign of ‘inverted quality’ just before the end of the age: the triumph of the ‘counter-initiation’, the kingdom of Antichrist. This text is considered the magnum opus among Guénon’s texts of civilizational criticism, as is Symbols of Sacred Science among his studies on symbols and cosmology, and Man and His Becoming according to the Vedanta among his more purely metaphysical works.