Home » Books for Viverealtrimenti » The Esoterism of Dante

The Esoterism of Dante 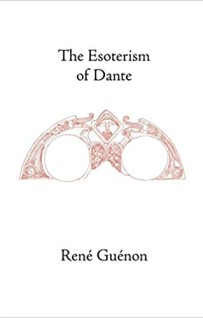 Without pretending to be thorough on so inexhaustible a subject, in The Esoterism of Dante Guénon nonetheless casts an unexpected light onto a specifically esoteric and initiatic aspect of Dante’s work, and above all of his Divine Comedy. Dante was without doubt far more than a literary genius, and one is justified in thinking that many treasures remain to be discovered in what Guénon calls ‘the spiritual testament of the Middle Ages’. The author undertakes to establish that the three divisions of The Divine Comedy represent stages of initiatic realization and testify to Dante’s knowledge of traditional sciences unknown to the moderns: the science of numbers, of cosmic cycles, and of sacred astrology. He also touches on the all-important question of medieval esoterism, and corrects the errors of earlier scholars who had only glimpsed the deeper meaning of Dante’s work-providing an entirely new explanation of numerous points not previously elucidated. Some of the same themes are further developed in Guénon’s Insights into Christian Esoterism.