Home » Books for Viverealtrimenti » The Door in the Sky

The Door in the Sky 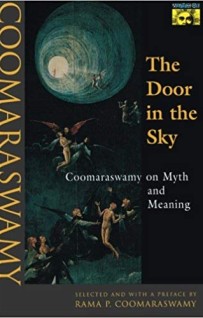 Ananda K. Coomaraswamy (1877-1947) was a pioneer in Indian art history and in the cultural confrontation of East and West. A scholar in the tradition of the great Indian grammarians and philosophers, an art historian convinced that the ultimate value of art transcends history, and a social thinker influenced by William Morris, Coomaraswamy was a unique figure whose works provide virtually a complete education in themselves. Finding a universal tradition in past cultures ranging from the Hellenic and Christian to the Indian, Islamic, and Chinese, he collated his ideas and symbols of ancient wisdom into the sometimes complex, always rewarding pattern of essays. The Door in the Sky is a collection of the author’s writings on myth drawn from his Metaphysics and Traditional Art and Symbolism, both originally published in Bollingen Series. These essays were written while Coomaraswamy was curator in the department of Asiatic Art of the Boston Museum of Fine Arts, where he built the first large collection of Indian art in the United States.

Ananda Kentish Coomaraswamy, (born Aug. 22, 1877, Colombo, Ceylon—died Sept. 9, 1947, Needham, Mass., U.S.), pioneer historian of Indian art and foremost interpreter of Indian culture to the West. He was concerned with the meaning of a work of art within a traditional culture and with examining the religious and philosophical beliefs that determine the origin and evolution of a particular artistic style. A careful scholar, he also established an art historical framework for the study of the development of Indian art.