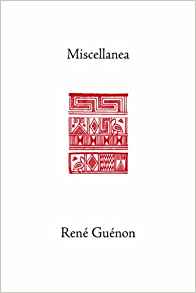 To spare readers extended research into obscure back issues of French journals long out of print, Miscellanea gathers together for Anglophone readers various articles by René Guénon, and by ‘Palingenius’, his pseudonym during the time of La Gnose, a journal he founded in 1909. These articles have been divided into three categories: Metaphysics and Cosmology, Traditional Arts and Sciences, and Some Modern Errors. From the first chapter of part one, ‘The Demiurge’, which we believe is the first text he ever submitted for publication (in 1909, at the age of twenty-three) to ‘Profane Science in Light of Traditional Doctrines’, of April-May 1950, more than forty years elapsed. The breadth of the topics covered can be seen from a sampling of chapter titles: Monotheism and Angelology; Spirit and Intellect; Silence and Solitude; The Empiricism of the Ancients; Gnosis and the Spiritist Schools; The Origins of Mormonism, On the Production of Numbers; Initiation and the Crafts; and The Arts and their Traditional Conception. In the latter two key chapters, the author explains how initiation became necessary in the measure that humanity receded from the ‘primordial state’, presenting the reasons for the degeneration of the arts and crafts due to the ‘fall’ or descending trajectory of the present cycle; but he also points out the possibility of an initiation into the ‘lesser mysteries’ based upon the craft of building which still exists validly in the West.