Man and His Becoming According to the Vedanta 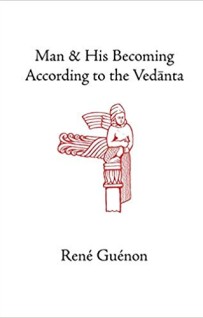 Guénon published his fundamental doctrinal work, Man and His Becoming according to the Vedanta, in 1925. After asserting that the Vedanta represents the purest metaphysics in Hindu doctrine, he acknowledges the impossibility of ever expounding it exhaustively and states that the specific object of his study will be the nature and constitution of the human being. Nonetheless, taking the human being as point of departure, he goes on to outline the fundamental principles of all traditional metaphysics. He leads the reader gradually to the doctrine of the Supreme Identity and its logical corollary-the possibility that the being in the human state might in this very life attain liberation, the unconditioned state where all separateness and risk of reversion to manifested existence ceases. Although Guénon chose the doctrine of the Advaita school (and in particular that of Shankara) as his basis, Man and His Becoming should not be considered exclusively an exposition of this school and of this master. It is, rather, a synthetic account drawing not only upon other orthodox branches of Hinduism, but not infrequently also upon the teachings of other traditional forms. Neither is it a work of erudition in the sense of the orientalists and historians of religion who study doctrines from the ‘outside’, but represents knowledge of the traditionally transmitted and effective ‘sacred science’. Guénon treats other aspects of Hinduism in his Introduction to the Study of the Hindu Doctrines and Studies in Hinduism.