Green Deen; What Islam Teaches About Protecting The Planet 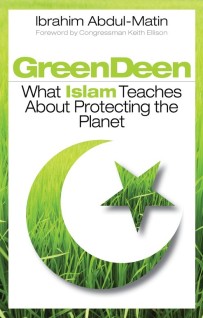 Ibrahim Abdul-Matin, a former sustainability policy advisor to New York Mayor Michael Bloomberg and former Outward Bound instructor, authored Green Deen: What Islam Teaches About Protecting the Planet in 2010. Few years later he co-founded Green Squash Consulting, a management consulting firm based in New York working with people, organizations, companies, coalitions and governments committed to equity and justice. Ibrahim Abdul-Matin sits on the boards of the International Living Future Institute encouraging the creation of a regenerative built environment and Sapelo Square whose mission is to celebrate and analyze the experiences of Black Muslims in the United States.

Deen is an Arabic word whose meaning may be not that obviuos to some people. It is used as a synonym for “religion”, “path”, “way of life”.

Islam is a Deen and, as we will discover presenting Abdul Matin’s book, it is a Green Deen because of its innate ecological attitude.

Indeed, in the preface of Green Deen the author mentions six Muslim ethical principles and their relation to the environment:

«Understanding the Oneness of God and His creation (tawhid), seeing signs of God (ayat) everywhere, being a steward (khalifah) of the Earth, honouring the trust we have with God (amanah) to be protectors of the planet, moving toward justice (adl), and living in balance with nature (mizan)».

The book is organized into four parts, each relating to one ecological challenge: waste, watts (energy), water and food.

The Earth is a Mosque

The Earth is a Mosque is a very effective expression for a book about Islam and the environment. That’s why it has been used to title the introduction of Green Deen.

If the Earth is a Mosque it has to be lived with a sense of sacredness. At the same time it is well known that in Islam there is no conflict between religion and science, that’s why we could consider a Green Deen both a spiritual and scientific path.

Living a Green Deen, according to Abdul Matin, is first of all to be steadily aware that everything emanates from the same, Divine, source.

Consequently, everything is interconnected, expressing the Oneness of God and His Creation (Tawhid) and has to be seen as a sign (ayah) of our Creator.

Living a Green Deen, also means to be aware that, according to Islam, humans are the pinnacle of God’s creation, blessed with intellect, reason and sensibility. For these reasons humans are the representatives of God on the Earth; the stewards (Khalifah) of the planet.

Living a Green Deen means also living absorbed in constant prayer to heal our hearts, making them pure enough to religiously care for our Earth/Mosque.

The following step, in the narrative of Abdul Matin, is to build and to implement a Green Deen movement.

In this regard, some excellent work has been done but a huge effort is still ahead of us.

«But waste not by excess, for Allah loves not the wasters».

From this short verse we can easily guess that overconsumption is not an Islamic Attitude.

Indeed “Islam teaches that we come with intrinsic value: We do not need to produce or acquire anything to be valuable”.

In other words a good Muslim has to be constantly aware that the power to consume endlessly is not a measure of our worth!

Overconsumption is logically connected with “overdevelopment”, responsible for forests’ cut, rivers and air pollution etc. Indeed, since the last decades of 1800, “growth and development happened so quickly that it soon strangled the natural world” and, as a direct consequence, conservation became progressively a priority, involving big personalities as Theodore Roosevelt and Walt Whitman.

Even the Islamic world was not indifferent to the environmental issue.

«Muslims were part of the process of raising awareness of the Earth as sacred as early as 1966, when the young scholar and Iranian Muslim philosopher Seyyed Hossein Nasr delivered a series of lectures at the University of Chicago in which he examined the relationship between man and nature, Nasr became the father of the modern Muslim environmental movement, and these lectures were later published as Man and Nature: The Spiritual Crisis of Modern Man».

Nowadays the real goal of a Green Deen, highlighted by Abdul Matin, is to use the resources of the Earth in a smart and efficient manner, finding economic opportunity in the environmental movement.

In Green Deen are mentioned some green Muslims who are devoting their full energies to move in this direction: Aziz Siddiqi in Houston, President of Resochem Corporation, Sarah Sayed, working with the interfaith environmental community in New York and the Adams Center in Washington DC.

«Among His Signs is this, that He sends the Winds, as heralds of Glad Tidings, giving you a taste of His (Grace and) Mercy».

In this part of his book Ibrahim Abdul Matin uses two effective expressions, describing the non-renewable sources as “energy from hell” (oil, gas, coal and nuclear energy) and the renewable ones, coming from the wind, the sun, from more sustainable consumption practises and increased efficiency, as “energy from heaven”.

Talking about “the gifts of the sun” Abdul Matin mentions Yusef Miller and Barbara Grant, green Muslims and experts in distributed generation. They manage Photovoltaic Products Plus -PPS-  whose motto is “changing the world one solar panel at the time”.

As an example of wind power generation, he mentions an article published in The Economist about Indians in Montana and North Dakota who in 2010 generated 886 megawatts/hours of electricity.

Of course the wise use of “energy from heaven” is directly related to the urgent need to create green jobs.

One interesting organisation mentioned in Green Deen is Green City Force, based in Brooklyn and “committed to increasing the number of green jobs and improving the efficiency of buildings”. Green City Force manages an interesting website deserving a visit: greencityforce.org.

Moving from New York to Chicago Green Deen reports the activities of IMAN (Inner City Muslim Action Network), “one of the most successful social justice organisations to come out of a Muslim community in more than thirty years”: www.imancentral.org.

In Green Deen Abdul Matin expressly encourages Muslims all over the world to engage in green jobs.

«And We send the winds fertilising, then send down water from the cloud so We give it to you to drink of, nor is it you who store it up».

«Do you bring it Down (in rain) from the Cloud or do We? Were it Our Will, We could make it salty (and unpalatable): Then why do you not give thanks?».

The Earth is 70 percent water and the water, writes Abdul Matin, “should be a community-shared resource […], managed by governments who operate justly” (in tune with the ethical principle of adl).

In the Muslim environment Green Deen should turn “blue”, for example by setting up a water recycling station in the mosques to reuse the water of wudu (the ablution before prayer) in their external gardens. Everyone should be careful in using water, avoiding to waste it during showers, house cleaning etc. Another crucial point is to avoid to drink bottled water (which generates a huge waste of plastic). A good filter to purify tap water could be the best alternative.

Last but not least: “a person with a Green Deen is mindful of the amount of water used during wudu”.

Some green Mosques, as the Central Mosque in Cambridge, offers already water saving wudu facilities. Hopefully, through a concerted effort, many others will follow.

According to Abdul Matin the Islamic imperative should be to avoid factory farmed meat and non organic food and, by reading his book, we can verify see how it is not so difficult to follow it his advice!

In the recent years the number of vegetarian and even vegan Muslims is rising.

Abdul Matin mentions the significant  example of Zachary Twist, the former operations director of Zaytuna College and Chairperson at Northstar School (California), who is a vegan activist.

However,  who is not ready to stop eating meat should buy it from halal, organic, free-range sources. Of course factory farmed meat is cheaper but quality should be preferred over quantity.

To get organic food, today, is not difficult. The number of organic farms, not far from big and small towns, are growing remarkably. They supply products to “green markets” but there is also plenty of delivery options. Abdul Matin mentions Norwich Meadow Farm, not far from New York but almost everybody can find an organic farm reasonably close to his home. Halal market is growing too, offering plenty of options for meat’s responsible consumption.

The practice, strongly encouraged in Green Deen, to manage urban and suburban food gardens is more common, nowadays, than in the recent past, giving further access to healthy and sustainable food.

Of course this short presentation of Green Deen gives only a little taste of what is to be found in the book.

This book is a must read for anyone who is interested in exploring the strong relation between Islam and ecology. After a decade from its publication, Green Deen movement is doing daily progress. In the UK it has inspired The Green Deen Tribe/Rabbani Project and other networks.

Green Deen; What Islam Teaches About Protecting The Planet has been a precious seed.

We should all contribute to spread its message, following its advises in our daily private lives  and engaging in local, national and international networks to make Islam everyday greener and to help to save the planet from a possible environmental collapse.