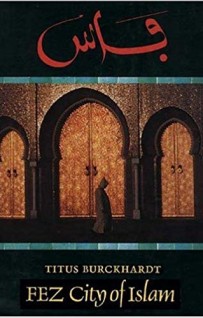 “Fez, City of Islam”, written by the noted art historian Titus Burckhardt, conveys a profound understanding of the sacred roots that nourish Islamic culture and civilisation. As a young man in the 1930s, Burckhardt spent some years in Morocco where he became acquainted with several remarkable representatives of the spiritual heritage of the Maghrib. Although he committed much of this experience to writing, it was not until the 1950s that these writings were developed into a book.—In “Fez, City of Islam”, Burckhardt writes of the history of a people and their religion-a history that was often violent, often heroic and sometimes holy. “Fez, City of Islam” relates the teachings, parables and miracles of the saints of many centuries and demonstrates not only the arts and crafts of Islamic civilisation, but also its sciences and administrative skills. Burckhardt’s unique black and white photographs from the 1930s are included. In addition 41 new colour illustrations have been specially selected to enhance Burckhardt’s originals. Here, text and illustrations come together to provide an insight into the way the life of a people can be transformed at every level by a religious tradition.