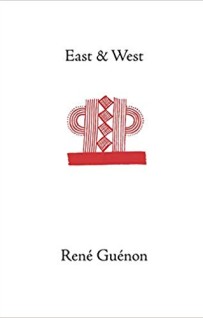 East and West, first published in 1924, was the fourth of a series of books that cleared the ground for Guénon’s later writings. His first book, Introduction to the Study of the Hindu Doctrines (1921), was an exposition of metaphysics as transmitted in the Hindu tradition, and served to establish his specific use of important terms such as ‘esoterism’, ‘tradition’, and ‘orthodoxy’. He next set about writing two extensive volumes critiquing what he called ‘pseudo-esoteric’ groups. The first of these, Theosophy: History of a Pseudo-Religion (1921), is an exposé of Madame Blavatsky’s Theosophical Society; the second, The Spiritist Fallacy (1923), examines the current of nineteenth-century spiritism that set the stage for many occult movements that appeared toward the end of that century. Guénon’s application of traditional metaphysics to the special case of pseudo-esoteric groups was then broadened in the present book to the general question of East and West as conservators and transmitters of traditional wisdom in the modern age. The titles of its two parts, ‘Western Illusions’ and ‘How the Differences Might be Bridged’, describe perfectly the book’s intention. Later books, especially The Crisis of the Modern World and its magisterial sequel, The Reign of Quantity and the Signs of the Times, further extended Guénon’s penetrating critique of the modern world.