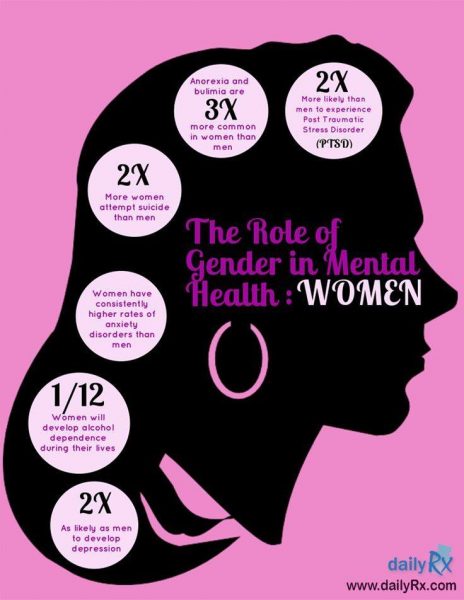 Priyaranjan Avinash is psychiatrist at Deva Institute in Varanasi (UP, India). He’s a big expert in legal psychiatry, addiction, women mental health, relationship issues and health policies. He offers specialized articles to India Medical Times. He wrote already about mental health in his motherland – India – for our magazine.

Before we speak of women mental health, we need to understand the issues of women’s health first. The topic of ‘women’s health’ includes health issues and diseases that are unique to women, such as gynaecological conditions; disease that are more prevalent in women and disease that are expressed differently in women and men, meaning that women may present with different symptoms, have more serious form or a different course of illness, or respond differently to interventions.

Women’s health also includes issues of access to care, quality of care and prevention of disease. Many women experience barriers to good health care, including limited access, intensive attitudes in the medical profession, and poorly coordinated referral systems. Whereas earlier views of women’s health focused exclusively on reproductive health, there is now a broader multidisciplinary approach that encompasses all organ system and includes not only biological but also psychological and social-cultural aspects of health and disease across the life span.

Now moving to the women’s mental health in particular, one of the most consistent findings in epidemiological research is that the Unipolar depression is about twice as common in women as in men. Women are also more likely to experience many anxiety disorders and over 90% of cases of eating disorders occur in women. Rates of bipolar disorder are similar in men and women however, women are more likely to develop depressive episodes of bipolar disorder and a rapid-cycling course.

Although alcoholism is much more prevalent in men, mortality rates among individuals with alcoholism are considerably higher in women. Recent researches also have shown gender differences in treatment response for some psychiatric disorders.

Mental disorders in women are most common during the childbearing years and often reproductive events may act as triggers for the onset or exacerbation of symptoms. Advances in medical treatment have led to major improvements in health care. An indication of the extent and burden of these problems comes from the findings of a World Bank project. Mental health problems were found to be one of the largest causes of lost years of quality life, accounting for 10.5% of all disability.

Psychosocial factors also play an important part in the mental health of women.

Gender differences in socializing processes and rates of traumatic abuse, as well as the various social roles of women as wives, mothers, caretakers of elderly parents and workers, all deserve consideration in understanding risk factors of mental illness and the effects of these disorder on women and their families.

In investigating common mental, behavioral and social problems in the community we find that women are more likely than men to be adversely affected by:

The mental health impact of long term, cumulative psychosocial adversity has not been adequately investigated.

Violence related mental health problems are also poorly identified. Women are reluctant to disclose a history of violent victimization unless physicians ask about it directly.

Psychiatric aspects of the menstrual cycle

Almost all women notice early symptoms also called peri-menopause while still having periods. This stage often begins in the early 40s and last for the whole menopause transition (until the mid 50s), but some women may experience them for the rest of their lives. The most common symptoms are: Hot Flashes, Night Sweats, Irregular Periods, Loss of Libido, and Vaginal Dryness.

Research shows that there are 3 main factors which are highly protective against the development of mental problems especially depression.

Special Aspects and consideration during treatment of mental illnesses among women

Long term management and rehabilitation of women with mental illness