Home » Books for Viverealtrimenti » Studies in Freemasonry and the Compagnonnage

Studies in Freemasonry and the Compagnonnage 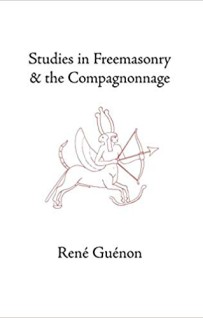 René Guénon (1886-1951) was one of the great luminaries of the twentieth century, whose critique of the modern world has stood fast against the shifting sands of intellectual fashion. His extensive writings, now finally available in English, are a providential treasure-trove for the modern seeker: while pointing ceaselessly to the perennial wisdom found in past cultures ranging from the Shamanistic to the Indian and Chinese, the Hellenic and Judaic, the Christian and Islamic, and including also Alchemy, Hermeticism, and other esoteric currents, they direct the reader also to the deepest level of religious praxis, emphasizing the need for affiliation with a revealed tradition even while acknowledging the final identity of all spiritual paths as they approach the summit of spiritual realization. Studies in Freemasonry and the Compagnonnage is both an attempt to rediscover the lost roots of Masonry and a fascinating look into the many controversies swirling around the subject of Masonry in serious intellectual circles during the first half of the twentieth century. It must also be classed, along with Symbols of Sacred Science, Spiritual Authority and Temporal Power, Traditional Forms and Cosmic Cycles, The Esoterism of Dante, Insights into Christian Esoterism and Insights into Islamic Esoterism and Taoism-not to mention related sections in many of his other books-as one of René Guénon’s masterful excursions into esoteric myth, symbolism, and secret history. Freemasonry may indeed be, as Guénon ultimately concluded, a largely degenerated and thus no longer strictly ‘operative’ offshoot of a true initiatory lineage; yet its symbolism, like that of the original Rosicrucians, remains profound, traditional, and therefore ultimately legitimate. And given that the ‘Spirit bloweth where it listeth’, it is always possible that symbolism of this order may awaken in a receptive soul intimations of the Truth and the Way, which can be of inestimable of value in ‘the path to the Path’, the quest for a living initiatory spirituality.