Home » Blog » Islam and ecology (and the ecology of Islam)

Islam and ecology (and the ecology of Islam) 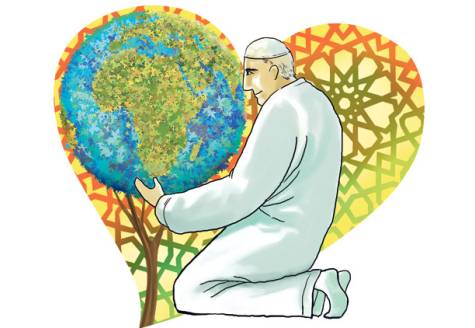 One of the most thorough pieces of text, which focus on issues surrounding the environment recently written, is by Jeremy Rifkin, titled The Green New Deal, published in September 2019.
It begins with an alarming warning:

«We are facing a global emergency. Our scientists tell us that human-induced climate change brought on by the burning of fossil fuels has taken the human race and our fellow species into the sixth mass extinction event of life on Earth».

This is not entirely new to the averagely informed public. As an internationally reputed scholar, Jeremy Rifkin, has always tried to be part of the solution. In his book, he highlights data, which can justify a cautious optimism.
As quoted in the introduction from The Green New Deal:

«According to a November 2018 study by Lazard — one of the world’s largest independent investment banks — the levelized cost of energy (LCOE) of large solar installations has plummeted to 36 dollars/megawatt hour, while wind has fallen to 29 dollars/megawatt hour, making them “cheaper than the most efficient gas plants, coal plants, and nuclear reactors” (Rifkin, 2018:7). Rifkin further adds that, “Within the next eight years, solar and wind will be far cheaper than fossil fuel energies, forcing a showdown with the fossil fuel energy”».

It may be early to confirm whether we are prepared for “a Green New Deal and the economic vision for the United States and the world”. However, it is clear the planet could survive this critical period and simultaneously everybody should be ready to provide their own contribution!
We have recently entered in the “Joe Biden era”, whose priority is an ambitious plan for a clean energy revolution and environmental justice.
Muslims, all over the world, are compelled to contribute in implementing a Green New Deal. It is well known that Islam is the fastest growing religion, counting today around 1.8 billion people. Therefore, a greater engagement within Muslim organizations focusing and addressing environmental issues will have relevant implications.
In 2010, Ibrahim Abdul Matin published Green Deen: What Islam Teaches About Protecting The Planet. In Arabic, the term “Deen” is defined as a religion or creed, a faith or belief, a path or a way. Matin highlights that:

«[…] A Green Deen is the choice to practise the religion of Islam while affirming the integral relationship between faith and the environment, or, better said, the natural world, the universe, and all that is in it».

Imam Zaid Shakir, co-founder of Zaytuna College, Harfiyah Abdel Haleem of Islamic Foundation for Ecology and Environmental Sciences (IFEES, in the UK) and Imam Siraj Wahal of Masjid al-Taqwa (in New York), have officially praised the text. Similar to Paul Keeler’s, Rethinking Islam and the West, Abdul Matin focuses on the environmental ethos of Islam, analyses six specific principles and their application to the relationship of Muslims and the environment:

«Understanding the Oneness of God and His creation (tawhid), seeing signs of God (ayat) everywhere, being a steward (khalifah) of the Earth, honouring the trust we have with God (amanah) to be protectors of the planet, moving toward justice (adl), and living in balance with nature (mizan)».

Following Abdul Matin in his philosophical excursus, Islam contains all the basic elements of a “genetically” environmentalist religion. Therefore, Muslims have a great responsibility to contribute to the health of the planet and its biodiversity and conservation.
Another prominent Muslim environmentalist is Turkish academic Ibrahim Ozdemir, a former Director General at Turkey’s Ministry of Education, the Founding Vice-Chancellor of Hasan Kalyoncu University and presently Professor of Philosophy at Uskudar University. Ibrahim Ozdemir, author of The Ethical Dimension of Human Attitude Towards Nature: A Muslim Perspective, explains the importance for an Islamic approach to environmentalism.
Ozdemir further addresses that Islam is a “genetically environmentalist religion” in his article with Al Jazeera. He says that “many Muslim majority countries bear the brunt of climate change, but their cultural awareness of it and climate action are often staggeringly limited. A movement of Islamic environmentalism based on Islamic tradition – rather than imported white saviour environmentalism based on first-world political campaigns – can address both”.

In the UK, an important Muslim environmentalist is Fazlun Khalid, the Founder-Director of the Islamic Foundation for Ecology and Environmental Science (IFEES) — based in Birmingham — and author of Signs on the Earth: Islam, Modernity and the Climate Crisis, published in 2019. IFEES is a multi-dimensional organisation networking worldwide with NGOs, international organisations, academic bodies and grass roots organisations.
The organisation invites “collaboration from institutions and individuals from all persuasions who are also dedicated to the maintenance of the Earth as a healthy habitat for future generations of humankind as well as other sentient beings”. IFEES is currently working on several projects. One of the most interesting is about the urgent and continuous need to host a plastic-free-iftar, which is also a priority for the Muslim Council of Britain and its Climate Change and Sustainability Team, otherwise known as the “Green Team.”
Hosting plastic-free-iftar, indeed, a part of a wider range of initiatives for eco-friendly Ramadan.

There are a large number of Muslim organizations, whom engage globally and focus on environmental issues. A few are mentioned below:

Green Muslims: A volunteer driven headquartered in the metropolitan Washington, DC, working to connect Muslims everywhere to nature and environmental activism. They host educational, service and outdoor recreational events and strive to serve as a bridge connecting the Muslim community with local climate action organizations.

Muslim Hands: An international aid agency and NGO working in over 30 countries around the world, with projects prioritising environmental sustainability.

Khaleafa: A “sacred trust” based in Canada, whose goal is to reignite the discourse surrounding the Islamic approach to environmentalism and to draw upon the essence of these teachings.

Wisdom in Nature: A UK based network, offering team trainings in Inclusive Leadership and Facilitation, Permaculture and Islamic Ecology.

Green Prophet: Headquartered in Ontario, Canada with satellite offices in Amman and Tel Aviv, the Green Prophet is a trusted source for green design, architecture, lifestyle, policy and renewable energy news in the Middle East. It has been founded by biologist, journalist, technology entrepreneur Karin Kloosterman, whose work and commentary has appeared on major international media, such as Bloomberg, Discovery Channel, CNN, The Washington Post, Al Jazeera and many more platforms.

The Eco-Muslim: The Eco Muslim is part of Zaufishan Iqbal’s “eco jihad”, a greener effort to ensure our community is cleaner than before. Zaufishan encourages everyone to live on less by following the 4Rs: Reuse! (E.g. leftover water) Reduce! (How much food you waste) Recycle! (Your unwanted clothes) Reject! (Poverty, homelessness and exploitation) Insha-Allah (God willing)”.

Finally, good news of environmental engagement are coming from Morocco, where it is now active a state-sponsored program to preach environmental stewardship through Islam.
…and from Indonesia, which is the world’s most-populous Muslim-majority country and has evolved into a unique laboratory for combining two philosophies rarely associated with one another in the Western world: Islamism and environmentalism.
These are only some glimpses of the work several Muslims are currently achieving globally and at the grass roots level. However, it remains clear that there is yet, still a considerable amount of work to be completed – and according to authoritative scientific data, time is limited.
Then, again: let’s move forward; the Muslims have a great responsibility, nowadays, to contribute to a Green New Deal and they have to be ready to be part of the solution!