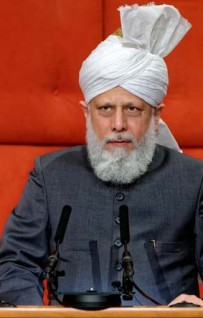 Ahmadiyya Muslim Community has been founded nearly one hundred and thirty years ago. It has soon spread from its place of origin (India) and, today, it is present worldwide, counting tens of millions of members.

Headquartered in London, it is well reputed in Europe, probably because of its tolerant and nonviolent approach, explicit in its slogan Love for all, hatred for none.

Qadian is a small town in Punjab (India) with around forty thousand inhabitants (mostly Muslim and Ahmadiyya). It was founded, in 1530, by Mirzā Hadi Baig, a nobleman of Persian origin. The word Mirza (equivalent to Rajput) comes from Persian ‘Amīrzāde: son of commander.

The title is a homologue of English Prince of blood and of French Prince du sang, qualifying a direct descent from imperial families. 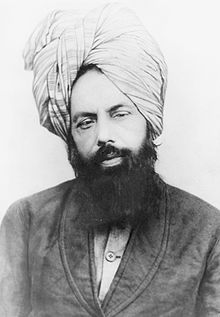 Short biography of a “new Messiah”

During Mirzā Ghulām Ahmad’s childhood, Qadian is considered as a remote village but his father ― Mirzā Ghulām Murtaza ― is the most prominent landowner, having privileged relationships with political and economic Indian and foreign élites.

Once adult, he doesn’t devote much time to professional life or caring about his family business, rather gaining the reputation of a person preferring to live in seclusion.

Indeed, he will spend most of his time studying religious books and praying in the mosques.

He even becomes, day by day, more active in the defense of Islam with exponents of other religions, mostly members of Hindu reform movement Arya Samaj and with Christian missionaries.

In 1889 he asserts he had a divine revelation and to be eligible for an oath of loyalty from the Muslims who would follow him. With the first oaths sprouts the Ahmadiyya Muslim Community, whose founder asserts to be the Imam Mahdi (the divinely Guided Leader) and the Promised Messiah, awaited in several religious traditions, even among the Muslims. It should not be left out to briefly mention that the Islamic eschatology foresees the apparition of Mahdi, at the end of times, to neutralize the Dajjāl: an equivalent of Antichrist. After the Mahdi — or, in Shia traditions, at the same time — will appear Jesus (Isa, in Arabic, whose role, in Islam, is much more important than an average Christian could imagine) who, assembling the forces of virtuous people, will kill the Dajjāl and thus becoming the king of the earth for forty years living a perfect Islamic life.

In general, The Koran presents Jesus as a great prophet of God (rasūl Allāh) — of human, not divine, nature — born by a virgin and protagonist of several miracles «with Allah’s permission».
Jesus, according to the mainstream Islamic tradition, did not die on the cross, rather another man who resembled him was put on the cross, whereas Jesus himself was raised to heaven with his body and soul, living there and coming back to earth in the same person just before judgement day.

He would rule for a few years and then die a natural death (no man, in Islam, is immortal, even Muhammad died in 632), he will be buried in Medina to be resurrected, along with all other humans, on the Yawm al-dīn (Day of Judgement) for ultimate divine judgement, when Allah will punish or reward all resurrected dead people, based on their individual deeds and merits.

The worthy people will enjoy the eternal pleasures of Janna (paradise) while the damned ones will suffer the temporary Jahannam (Islamic hell).

Nevertheless Mirzā Ghulām Ahmad has promoted an heterodox perspective where Jesus, even suffering on the cross, didn’t die in that circumstance.

He has been put down when he was just apparently dead or in a coma and he has been brought into the grave by Nicodemus and Joseph of Arimathea.

Treated with an extraordinary powerful ointment (including, among other ingredients, myrrh and aloe) ― even mentioned in The Canon of Medicine compiled by the Persian philosopher Avicenna and in several other Islamic medical books as Marham-i-Isa (Jesus’ ointment) ― he soon recovered. Then he met his disciples and he left Palestine in the direction of India with the purpose to meet the lost tribes of Israel (several members of them probably settled in Afghanistan and Kashmir).

Mirzā Ghulām Ahmad has dedicated an entire book (among more than the ninety he wrote) to Jesus’ possible journeys after the ordeal of crucifixion whose title could not be more clear: Jesus in India.

He has described Jesus’ itinerary from Palestine to Kashmir, crossing territories of actual Syria, Persia, Afghanistan and Pakistan. He has even clearly indicated the place where Jesus, in old age (when he was around one hundred and twenty), should have been buried after he died of a natural death: Rozabal, (Srinagar’s old town).

The claimed natural death of Jesus represents an event of crucial importance in the preaching of Mirzā Ghulām Ahmad. Indeed, opposed to the mainstream Islamic eschatology that the same (old but living) Jesus would come down from heaven, at the end of times, as a Messiah to the Muslims, Mirzā Ghulām Ahmad asserted that the concerned prophecies should be interpreted in a metaphorical manner. The new Messiah, in his view, will not be the same person who already came but it would be someone else, with his same nature to affirm similar principles.

Mirzā Ghulām Ahmad, as already anticipated, claimed he has received the revelation to be the chosen one, even in compliance with old prophecies, inaugurating a Messianic age where Islamic principles could affirm through knowledge, persuasion, love for other people (no matter of which religion), strongly refusing any kind of violence.

Mirzā Ghulām Ahmad announced to be the promised Messiah and Mahdi in 1891. At the end of that year — on December twenty-seventh, twenty-eighth and twenty-ninth — in Qadian there was the first Jalsa Salana (annual gathering): the annual meeting of Ahmadiyya Muslim Community. It involved just seventy-five people. Nevertheless, the number of participants to the Jalsa Salana grew till two thousand in 1907.

In 1908, a day after Mirzā Ghulām Ahmad’s death, the community elected Hakeem Noor-ud-Din as his khalīfah (“successor”).

In 1914, when the first khalīfah passed away, Ahmad’s son, Mirza Basheer-ud-Din Mahmood Ahmad was elected. The young successor was not accepted by all members, causing one split and the creation of the minority Lahore Ahmadiyya Movement, defined by sociologist Massimo Introvigne: «nearer to traditional Islam. His members try to spread its message in the West with some adaptation and less emphasis on the messianic nature of the founder who is, anyway, venerated».

In 1946, one year before India’s independence and the consequent partition giving origin to Western and Eastern Pakistan, the participants to the annual Jalsa Salana of Ahmadiyya Muslim Community were around forty thousand.

In 1948 the Community transfers its headquarters to Rabwah, in Pakistan and, then, annual meetings started to be organized there, with an increasing number of participants.

The life of Ahmadiyya Muslim Community becomes more difficult since 1974 when, in Pakistan, the parliament, by the help of seventy-two Islamic sects declare, unanimously, that Ahmadies cannot be considered as Muslims.

One decade after, crucial changes in the Pakistani Penal Code forbid Ahmadies not only to spread their “heterodox” perspectives but forbade them even to remotely “pose” as Muslims.

Section 298-C of 1984 Ordinance XX[1], for example, contemplates a punishment for up to three years imprisonment for «Any person of the Quadiani group or the Lahori group (who call themselves ‘Ahmadis’ or by any other name), who, directly or indirectly, poses himself as Muslim, or calls, or refers to, his faith as Islam, or preaches or propagates his faith, or invites others to accept his faith, by words, either spoken or written, or by visible representations, or in any manner whatsoever outrages the religious feelings of Muslims».

Because of following persecutions and arrests, in 1984, the then head of the community, the fourth khalīfah, moves to London and many Ahmadies are forced to ask for political asylum in Western countries (among those especially in Germany, where Ahmadiyya now are the first Muslim Community to be officially recognized as a public entity).

The Ahmadies are considered as heretic by other Muslims because, in addition to a different eschatological perspective, their founder has been accused to have reopened the prophetic cycle,  which, according to Sunni and Shiite traditions, has ended with the figure of Muhammad. Although Mirzā Ghulām Ahmad, speaking of himself as prophet, clearly indicates that his prophethood is merited by fully following the prophet Muhammad and is not a new or law-giving prophethood, but a limited one, referring to direct communication with Allah.

Nowadays Ahmadies have to face severe opposition not just in Pakistan. The Wahhabi government of Saudi Arabia doesn’t allow them to do the pilgrimage to Mecca and they are victims of persecutions also in Bangladesh, Indonesia, Kirghizistan and, most recently, in Algeria.

Today the Community is led by the fifth khalīfah, Hazrat Mirza Masroor Ahmad, elected in 2003. He lives in London and his Friday sermons are broadcast from the Baitul Futuh Mosque in London live to the whole community through their own satellite channel MTA International.

The Ahmadiyya Muslim Community, according to its official website alislam.org, has promoted the construction of around fifteen thousand mosques, five hundred schools and more than thirty hospitals worldwide.

Its members have translated The Koran in more than seventy languages and they spread the teachings of Islam and messages of peace and tolerance through their TV channel MTA, their website and the publishing house Islam International Publications. 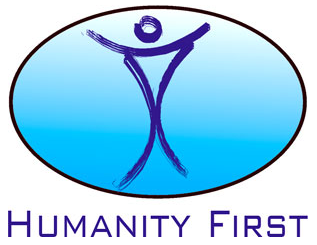 They are also very active in the humanitarian field with NGO Humanity First.

With a growing Muslim presence in the West, it is probable that the message and the activities of Ahmadiyya Muslim Community will arouse, day by day, more interest.

“298B. Misuse of epithets, descriptions and titles, etc., reserved for certain holy personages or places.

1.Any person of the Quadiani group or the Lahori group (who call themselves ‘Ahmadis’ or by any other name) who by words, either spoken or written, or by visible representation;

b.refers to, or addresses, any person, other than a wife of the Holy Prophet Muhammad (peace be upon him) as ‘Ummul-Mumineen’

c.refers to, or addresses, any person, other than a member of the family (Ahle-bait) of the Holy Prophet Muhammad (peace be upon him), as ‘Ahle-bait’; or

d.refers to, or names, or calls, his place of worship as ‘Masjid’;

shall be punished with imprisonment of either description for a term which may extend to three years and shall also be liable to fine.

2.Any person of the Quadiani group or Lahori group (who call themselves Ahmadis or by any other name) who by words, either spoken or written, or by visible representation, refers to the mode or form of call to prayers followed by his faith as ‘Azan’ or recites Azan as used by the Muslims, shall be punished with imprisonment of either description for a term which may extend to three years, and shall also be liable to fine.

3.298C. Person of Quadiani group etc., calling himself a Muslim or preaching or propagating his faith.

Any person of the Quadiani group or the Lahori group (who call themselves ‘Ahmadis’ or by any other name), who, directly or indirectly, poses himself as Muslim, or calls, or refers to, his faith as Islam, or preaches or propagates his faith, or invites others to accept his faith, by words, either spoken or written, or by visible representations, or in any manner whatsoever outrages the religious feelings of Muslims, shall be punished with imprisonment of either description for a term which may extend to three years and shall also be liable to fine.”